I'm just a huge sucker for anything filled with marshmallow, so these marshmallow macarons were a no freaking brainer!!

The best part of loving baking so much and coming from a pastry background is being able to make almost anything you can think of from scratch. Marshmallow filing included! Although you can totally cheat (because I totally did for these) and buy some store bough marshmallow fluff and it works just as well and tastes the same. Buying the fluff saves you some time means less time in the kitchen and more time eating!!!

The shells of the marshmallow macarons are brushed very lightly with some water and then dipped in granulated sugar for a nice crunchy texture. With the sugar coating and marshmallow filling, they are very reminiscent of Easter peep marshmallows!

These marshmallow macarons are definitely one of my favorites. I just don't think you can go wrong with anything that involves some soft and gooey marshmallow!!!

Tools Needed for the Macaron Shells

In order to have success making macarons, you will need a few essential kitchen tools. Most of these you definitely already may have so no worries, if you've never made them before, you don't need anything fancy!!

How to Make the Macaron Shells

Sift together the dry ingredients

Wipe down the mixing bowl

Fold in the dry ingredients 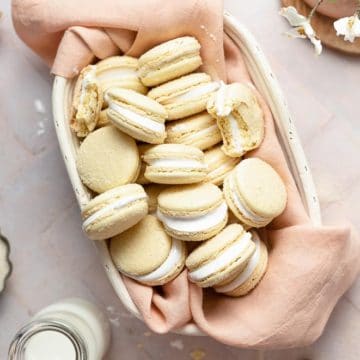